skip to main | skip to sidebar

No pictures this time around, inconveniently at a time when i would probably have the best pictures to post. That's what happens when you have a memory that exists only in the form of a hand-written to-do list, and when "pick up the camera off the park bench before riding 20 more miles" is not on that list. Let's just say that I gave myself quite a scare while trying to process the fact that I lost all my pictures from the trip. Thanks to a few kind souls and many more phone calls, my camera is safe and sound and will be shipped ahead on my route, courtesy of Arnie & Shelley Henden.

In other news, my daddy and my new wheel arrived, and I promptly spray-painted the latter fluorescent green, re-attached the pieces of flare, bent my frame/fork to fit the wide hub without breaking any welds. Been cruising right along. It's a wondrous thing and I definitely noticed the lighter weight as I ascended the Rockies. Only three days so far have my toes gone numb from the morning cold, but it's bearable. Nothing I'm not used to from all-night gallivanting episodes.

The scent of pine was a welcome replacement to the scent of roadkill as I pedaled up thousands of feet elevation gain. Went over Hoosier Pass (11,542') and only stopped once (for a photo-op) on the way up the 4th highest, 2nd steepest pass in Colorado. The Appalachians adequately prepared me for the surprisingly gentle Rocky Mountains. I am all smiles cruising through this state, absorbing as much of the scenery as I can and enjoying quality time with Daddy. When it comes to the amount of joy I am experiencing, I can't put it into words, so I won't even try. I just can't stop smiling, and can't stop thanking Jesus for this awesome creation.

Spending today in Grand Lake, where I worked as a wrangler last summer. Friends, familiar faces, horses, ice cream, and maybe some bowling? Not too bad. ;)

SPECIAL THANKS TO:
Arnie & Shellie Henden of Frisco, CO
Sheryl who picked up the camera, of Denver, CO

Ok, so I don't exactly need to reinvent the wheel, but I do need a replacement, which should be arriving via UPS next-day service tomorrow (Saturday). Wow. So yesterday I got my wheel trued (it was a bit out of alignment), but the spokes were tightened too much, causing my wheel to warp like no other as I rode today. After hitting a small rock in the road, my wheel warped so badly that it was jolting the seat forward twice per each revolution. Annoying? Yes. Managed to ride about 5 more miles in that condition, but when I stopped to look at the map, I was unable to get back on due to wheel condition. I hauled the beast on my shoulders about a half-mile before someone stopped to pick me up and give me a ride to the bike shop down the road. One glance at it and the mechanics knew that the wheel was shot. Dead. Kapoot. Sadness ensued, though at least I still rode 47 miles today. This wheel has taken me almost 2000 miles and now must be replaced. Booo.

Thankfully, Unicycle.com offered to donate an upgraded wheel for me to use: stronger, and about half the weight. Perfect timing? Yes; tomorrow I begin climbing into the Rockies, and the day after, I will be ascending Hoosier Pass (highest point on the Transamerica Route). The owners of Unicycle.com has been so wonderful in working with me (even while they're are on vacation!!) and accommodating my needs to get me a wheel asap. Truly amazing.

Tomorrow Marritt will fly home and my daddy will fly in for the "changing of the guard." Yay for altitude! Yay for mountains! Yay for a new (3-liter!) water bottle!

"Toto, I have a feeling we're not in Kansas anymore!" 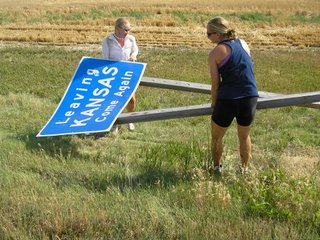 [we propped up the broken "leaving" sign where the missing "welcome" sign was, hoping to mess with the minds of all who enter this dreadful state]

Thank God for state lines. The last two days in Kansas, the wind was around, but behaved itself. I rode my second century, but this time around, I rode 73 miles the next day instead of taking a rest day. My body was not happy with me, as I contined to ride several days afterwards, tallying decent mileage. Funny how as soon as we crossed into Colorado, the wind calmed, then turned into a tailwind (tailbreath?), blowing just my speed so that I felt absolutely no moving air as I somehow survived the 109-degree day of riding through eastern Colorado's desert. Got a bit loopy from dehydration, but Marritt saved me by riding back to meet me with a big Powerade. 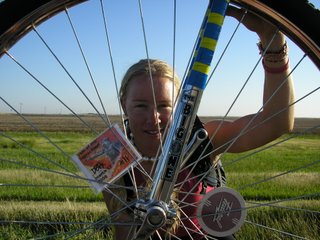 [the flatness of Kansas, the flare on my wheel]

Needless to say, I'm alive, and enjoying Colorado's hail storms. Got my first glimpse of the Rockies and I'm pretty much half-way on my journey! My metabolism has finally caught up with me; in a period of about 3 hours, I ate a combo meal from Wendy's, a frosty, 5 very large scoops of ice cream, and half a medium pizza. Just as an example. Seeing other cross-country cyclists is an enthusiasm boost each day. Marritt and I have ridden with a couple of others for the past several days, which has been really fun and a great deviation from the norm. Okay, what I mean by that is I ride by myself all day everyday, and get to hang out with more people in the evening. I guess that's what happens when I only average about 8 mph.

My goal is to come up with some sort of method to eliminate the perma-sleep-deprived, perma-dehydrated state of being I'm attempting to ride with. You know it's bad when your eyelids droop while perched atop a wheel, and when you can't swallow. Not that dry rocky mountain air will help any, but we hated Kansas so much that we vowed to never return.

One wheel for One. 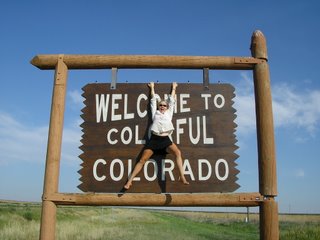 
SPECIAL THANKS TO:
Jack and Dick of Lyons, KS
Kinder-Morgan of Conway, KS
Annie Pat of Canon City, KS

For All My Fellow Nerds...

Just a few simultaneous equations for some mathematical fun. This is the best I can do to portray my day today:

At least the wind kept things a little cooler, honed my balancing skills, and forced me to learn to ride while leaning sideways, keeping my mind somewhat distracted from the saddle sores that often shoot excruciating pain down my legs. Forget that silly talk about Kansas potentially being my favorite state. Apologies, Kansans. 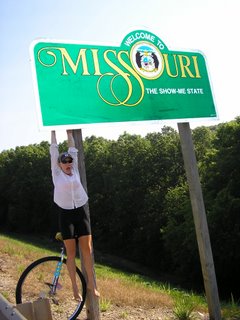 Wow. So much to say. TOO much to say. Marritt Cafarchia has taken over the "safety escort" position and because we are practically twins, both good and bad comes of it. Good things include laughing, yelling at objects (i.e. hills, towns, hunger, etc) when they make us angry, yelling at things for no reason, singing, mid-day power-naps, camping behind a dumpster (true bums), intensity, and the reminder I received from her one morning: "That's the point of life: to kick your own @$$." Bad things include coming up with lofty plans to maximize mileage and minimize sleep, annnnd... that's about it.

Since I last wrote, I've completed a 105-mile day, which was the best thing I could have done to relieve the mileage pressure I've been putting on myself. I did this even before we entered Kansas, so I'm hoping to get one or two more in before entering Colorado. Speaking of Kansas, hooray for being in my 5th state!! If western Kansas is as flat as all the Kansans say it is, this might be my favorite state of the trip, despite relentless sun and unpredictable winds. I mean, I might even have to send my book home, as I won't be able to read while focusing on balancing in the winds. I've remained pretty much unsunburnt thanks to the BPOTT (best purchase of the trip): a thin, white, long-sleeved shirt.

A lot of the past week or so has been full of personal growth and self-realizations. They're never fun, but always worth it. I won't get into details, but I'll just sum it up by saying that my decision-making motto has become: "In the name of Happiness." The Ozark Mountains made me cry, but mostly because of the pain I experienced due to worn out chamois shorts; hills are no fun, but holes are worse.

When I was little, armadillos used to be my favorite animal. Clearly I had never smelled one. Just when I thought possums were the stupidest animals alive (or dead on the side of the road), along came armadillos, "possums in shells." Send an address if you want a piece of one in the mail. Caution: 90% of armadillos in the southern Missouri region have leprosy. The turtles like to sit in the middle of the road too. What they are thinking, or not thinking, beats me. Another animal that has died on the trip is my "platypus" (my h2o-carrier), which fell and got demolished by a truck. Until further notice, I'm fueling this machine on a 1-liter soda bottle, often having to stop at houses in the middle of nowhere to refill.

Sidenotes:
I am not riding a ukulele.
I am not doing a marathon.
FedEx drivers are the coolest.
Laura Ingalls Wilder's house is not on a prairie. 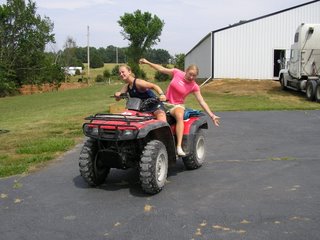 Four-wheeling on a rest day in Seymour, MO. Felt kinda bad passing the Amish families on their farms, but someone's gotta enjoy technology, so we did... with a wave and a smile, of course. I mean, gimme a break, at least I'm not DRIVING cross-country, right?

Memphis, or shall I say, Graceland

A few pictures capturing my time in Memphis... 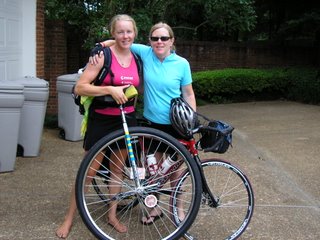 My mom finishes her last day of the journey to Memphis 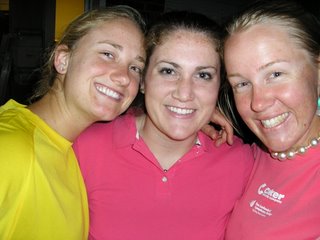 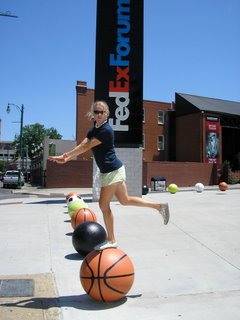 Outside the FedExForum, where the Memphis Grizzlies play, and where Emily works. 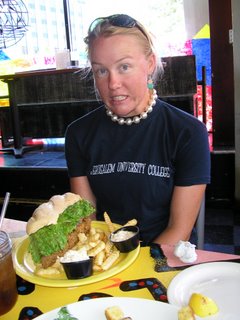 A giant catfish sandwich, after eating fried pickles: yes, they do exist, and are quite tasty! 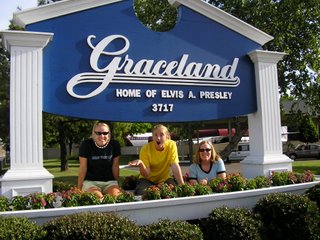 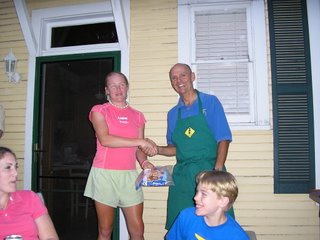 BBQ with the Memphis Unicycle Club. Thanks Tommy & crew, I had a great time!
Posted by Gracie Cole at 10:12 AM 8 comments:

Tennessee: where every bridge is a memorial, every acquaintance warns you of personal safety, and every 20 feet marks a jarring crack in the road.

When a newspaper reporter inquired about my trip, she understood the awareness-raising and fundraising part of my trip, yet remained among the slightly-confused majority who doesn't quite understand why I'm doing the unicycling part of my trip: (I quote) "And you couldn't find something better to do with your summer?"... as if I chose this activity by default, or because I had nothing else to do. I have managed to come up with more tangible reasons why maybe I shouldn't be the only girl on a unicycle this summer - perhaps they will help others relate to and understand the undeniable benefits: 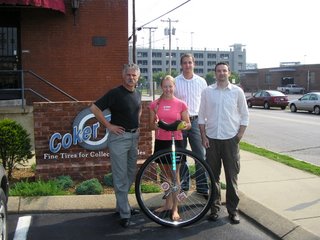 hang out with successful businessmen 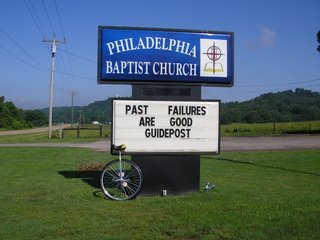 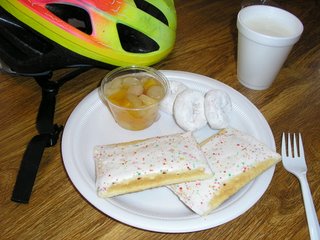 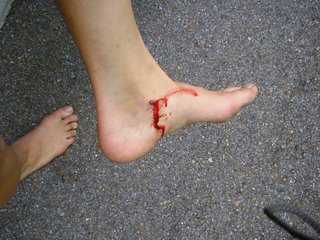 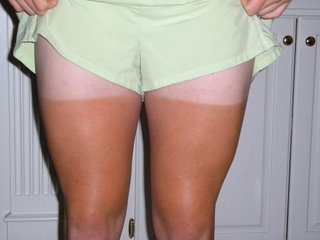 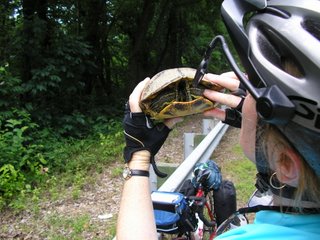 
Think about a couple of months of all this and, like, free hair highlights, obvi. Other bonus material includes meeting the man who invented the "Fun Factory" for Playdoh, a woman who won the Tennessee lottery, and getting to learn all about the physiology of maggot-infested armadillos.

This week I crossed paths with the first (hopefully of many) cross-country cyclists: Tom Rand. Seeing another cyclist drastically boosted my enthusiasm! He's riding for a great cause - check it out. P.S. Raise your hand if you think his last name should be Cruise. P.P.S. I'm raising my hand.

Thanks to Ginny Burney of Indianapolis for pointing out that I'm about to cross the Mississippi River... I had not noticed that, as I'm slightly geographically challenged.
Westward!
Carpe Diem.